A method is proposed for integrated probabilistic risk assessment where exposure assessment and hazard characterization are both included in a probabilistic way. The aim is to specify the probability that a random individual from a defined (sub)population will have an exposure high enough to cause a particular health effect of a predefined magnitude, the critical effect size (CES). The exposure level that results in exactly that CES in a particular person is that person’s individual critical effect dose (ICED). Individuals in a population typically show variation, both in their individual exposure (IEXP) and in their ICED. Both the variation in IEXP and the variation in ICED are quantified in the form of probability distributions.

Assuming independence between both distributions, they are combined (by Monte Carlo) into a distribution of the individual margin of exposure (IMoE). The proportion of the IMoE distribution below unity is the probability of critical exposure (PoCE) in the particular (sub)population. Uncertainties involved in the overall risk assessment (i.e., both regarding exposure and effect assessment) are quantified using Monte Carlo and bootstrap methods. This results in an uncertainty distribution for any statistic of interest, such as the probability of critical exposure (PoCE). The method is illustrated based on data for the case of dietary exposure to the organophosphate acephate. We present plots that concisely summarise the probabilistic results, retaining the distinction between variability and uncertainty. We show how the relative contributions from the various sources of uncertainty involved may be quantified. 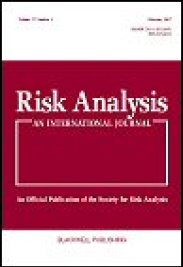