The concept of consumer risk perception is important in order to understand and explain consumers’ food choices.

Consumer perceptions of risks associated with specific foods or food-related hazards have been extensively investigated (see, among others, the different articles of Frewer et al. and Rosati and Saba, 2004), as well as the consequences of perceived risk for consumption intentions (see, among others, Pennings et al., 2002; Verbeke and Viaene, 1999; Verbeke, 2001). In addition, it has been recognised that consumers’ ethical concerns or other core values such as preferences for specific production methods may interact with risk perceptions in terms of influencing consumer food choices (Dreezens et al., 2005).

Consumers are not only led by technical considerations in their assessment of the impact of potential hazards. They are also influenced by psychological factors such as whether they perceive that they are involuntarily exposed to a hazard, and the extent to which they believe a particular hazard is potentially catastrophic and uncontrollable.

In other words, the psychology of risk perception drives public risk attitudes:

Risks are not the same for everyone. Differences in perceptions of risk and benefit associated with various food hazards exist between: 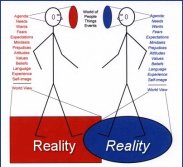 The way in which people assess perceptions of food risks:

People often believe that they are at low personal risk from hazards, a phenomenon known as “optimistic bias” or unreal optimism (Miles and Scaife, 2003). Food safety hazards and in particular lifestyle risks tend towards optimistic bias (it won’t happen to me). This optimistic bias can be a serious obstacle for effective risk communication (Weinstein and Klein, 1995).

In the case of optimistic bias, people:

Frewer, Shepherd & Sparks (1994) have studied consumers’ determinants of risk perceptions, and found it to be especially prevalent for lifestyle risks (see figure below).